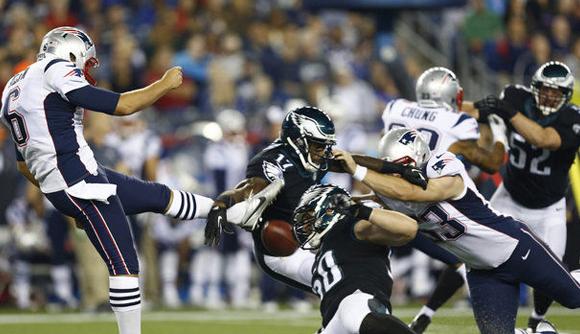 The first meeting of coaches Chip Kelly and Bill Belichick will be played in the cold of Foxborough, while Andrew Luck will be for the second time on his career in the steel city.

The Eagles hope the former coach of the University of Oregon can help them the end their slump against the NFL champions as they have four consecutive defeats, including the one in Super Bowl XXXIX. Philadelphia has not won at Gillette Stadium since 1987. Despite Philadelphia’s bad streak, the series is tied with six wins apiece. The Patriots come as the favorites in the NFL betting Odds to win by -4.0 points and in the last five against the Eagles are 4-1 SU and 2-3 ATS.

Player to watch: With some doubts on the quarterback position, running back DeMarco Murray could be the key to winning this game. New England will no longer have defensive tackle Vince Wilfork, who helped them finish in the top 10 against the run last year, allowing 104.3 yards per game.

The Steelers will try to keep their hot streak in Heinz Field against the Colts when they received them for the second consecutive season. Mike Tomlin’s team has lost only one of the last 14 games at home in the series. Last year, it was a great offensive duel in Pittsburgh, as both teams combined for 85 points, 60 first downs, and 1,087 total yards. The Steel Curtain is very difficult to beat at home and is -2.5 in the NFL Odds. In the last five games against the Colts, the Steelers are 3-2 SU and 2-3 ATS.

Player to watch: Andrew Luck threw for 400 yards, three touchdowns and two interceptions in the last year’s game and could repeat his performance this season as Pittsburgh’s secondary remains as one of their weakness. Indianapolis has won just six of 26 games against the Steelers.

Two of the most traditional teams in the NFC will meet this weekend at Soldier Field. It will be the first time since 2006 that the 49ers visit the Windy City, where they have not been able to win in the last 26 years. San Francisco has a slight advantage in the series with 32 wins in 63 games but has a run of four straight defeats on the road to the Bears. For this game, they are favorites in the NFL Odds at -1.0 and in the last five are 2-3 SU and 3-2 ATS.

Player to watch: Quarterback Colin Kaepernick was intercepted three times in last year’s game, so he will have to improve his performance to win his first match at the legendary Soldier Field. The Bears passing defense was the third worst in the league in 2014, allowing 264.4 yards per game.

The TCF Bank Stadium will have the duel between two of the best running backs in the league when the Vikings host the NFL champions. Adrian Peterson and Marshawn Lynch will be face to face for the third time in their careers. It will be the first game in Minnesota since 2009, and the Seahawks have an advantage in the series with eight wins in 13 matches. Pete Carroll’s team is favorite in the NFL lines at -4.5 to win this game and is with 3-2 SU and 3-2 ATS in the last five versus the purple square.

Player to watch: Adrian Peterson has rushed for 247 yards and two touchdowns in his last two games against Seattle. The bad news for the Vikings running back is that the Seahawks only allowed an average of 81.5 rushing yards per game in 2014.

Visit NflScheduleWeek13.com for the NFL week 13 game previews, and recaps with the best of the 2015 NFL season.